The question of who is responsible for the pregnancy of sensational singer Mzbel has popped up once again after photos of the singer and a certain Maxwell Mensah hit media circles.
Already, the said Maxwell had been widely speculated as being the man responsible for the musician’s pregnancy, although this has not been proven beyond doubt.
Several news reports had speculated that Maxwell was responsible for Mzbel’s pregnancy and that Maxwell was believed to be her manager.
Interestingly, this same Maxwell was said to have dated or may be dating actress Nana Ama McBrown. It is obvious Mzbel would not be comfortable with the public’s interest in who impregnated her but this is one of the challenges she may have to live with as a celebrity with a large fan base.
Indeed, when news broke that the musician was pregnant, she denied it vehemently but from all indications, the singer is very pregnant and cannot hide it any longer.
Already, she has a handsome son in his early teens.Perhaps, after delivery, the child’s father would not be hidden from the public any more.
But until then, the question still remains unanswered and her fans would continue to miss her public shows.

NPP to revert SHS to four years if voted into power 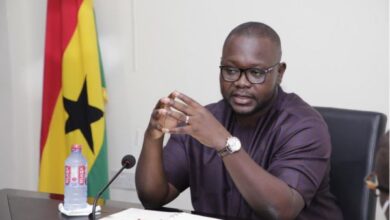